Did I ever tell you about the time…Learning Annex Edition.

So if you read my last post you already know that I have a new job. Happy to report that it’s pretty awesome and I am happy. Part of my role is to continue to be doing all the incredible things that will get people excited, talking and help grow amazing startup companies and brands that I am working on but the main difference is I won’t be as front and center as I used to be but rather doing these things from behind the curtain like the wizard in that movie with Michael Jackson, Diana Ross and of course Nipsey Russell. I am ok with that but in an effort to stay relevant and attractive to the opposite sex I have decided to post once a week an amazing idea that I have either done or want to do so that I stay top of mind with the goal that when I walk into a room people whisper under their breath “There goes the smartest man in the world” or “There goes the greatest living creative marketing person ever”. If that is too much I would also accept “I think I need to change my pants”

Many years ago I worked for a little company called Zipcar. You may have heard of them since they are now a publically traded company boasting that they are the largest car sharing service around. My role at Zipcar was simple. I was the first international employee and was given the task of launching and growing the Canadian market with very little budget.

I live for these kind of challenges and am pretty good with solving them.

In the beginning one of the many marketing things we did was to pass out postcards promoting Zipcar through street teams. This was very effective because our teams were made up of awesome people but with limited resources we could only cover a one or two small parts of the city at a time and this became a problem since in my eyes we weren’t maximizing the opportunity.

Problem: How do you scale something that is working when you don’t have the people resources to do so?

Solution: or at least my solution, and be prepared to be amazed!

All throughout the city of Toronto there are newspaper style boxes offering free catalogs and marketing collateral for things like real estate or cars for sale and these boxes are chained to the free alternative and other daily newspaper boxes. They are always in high traffic areas (usually next to public transit) and actually quite used as far as emptied often.

I wanted my own box. (something I’ve said more than once in my life)

Since I didn’t know where to get one made or could even afford one I did the next best thing and dressed in black from head to toe and unchained all the unused Learning Annex boxes (The Learning Annex wasn’t operating in town any longer or at the least had abandoned their boxes), threw them in my unmarked suv with the plates removed (I watch a lot of movies) and brought all the boxes back to my lair for their transformation, and by transformation I mean they got painted Zipcar green with a very attractive Zipcar sticker on them with a printed sticker saying Amazing offer insidie!.

Once the paint was dried they were returned back to the street and re-chained to all the other boxes but now stocked with Zipcar marketing collateral all with a unique promo code on them to track the effectiveness of the boxes. 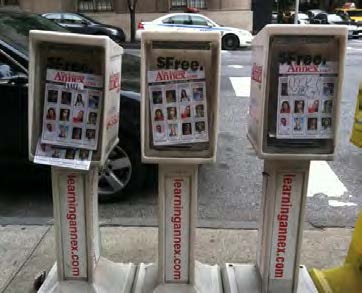 While this was probably close to 8 years ago and my memory is fuzzy on exact metrics the boxes (collectively – there were 5 of them) brought in about half the amount of new members as the street team, were used in media photo opportunities and created a different impression as to the size and credibility of this new brand to the area. The street team was always more effective because nothing replaces the human interaction but it was a very low cost passive sales team

that created extra marketing touches while at the same time allowing myself to live out a bad sitcom premise for two nights. Also its probably important to notice that no one at the ole’ head office knew about this or it probably would never had happened.

As you can see this is a pretty small idea with a big impact. What ideas have you done lately to make an impact?