Will The “FaceBook” movie suffer the same fate as Scott Pilgrim? 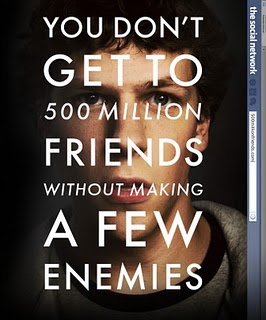 From everything I have read it is sounds like a well put together film and great story (true or not) and I will probably see it first weekend…but I got to wondering this morning if I am going to be seeing it alone.

The reason I say this is because most of my friends have seen the film already because one of the marketing strategies used to promote the film was to offer advanced screenings for all the cool “social media” kids in various cities with the hopes that these kids will run to the internets (both of them) and spread the word that this is a film worth seeing…makes sense but as films like Scott Pilgrim (shown at Comic Con to huge fanfare but underperformed at box office) and Kick Ass (shown at SXSW to huge fanfare but underperformed at box office) have shown, when you make a niche film (and you can make an argument that all films now are niche films) and give free screenings to all the members of that niche are you running a huge risk of harming your possible box office.

I admit Kick Ass and Scott Pilgrim will do great on DVD so another question could be, are theatric releaces now nothing more then promotional work for dvd sales?

Anyway I don’t have an answer for you but I would love to know what you think and I guess we will find out in a few weeks how The Social Network does in the theatres.