Influence, The Easter Bunny and Santa Claus walk into a bar… 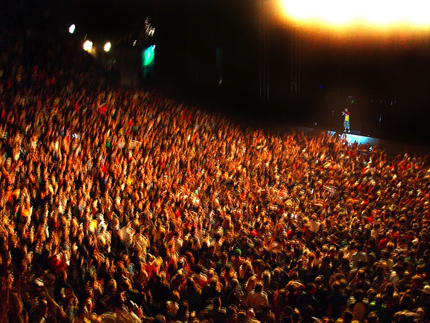 Influence is a real hot topic right now and the most interesting part about it is how everyone is trying to either measure it or justify it but like the title of this post hints, Influence is just like the Easter Bunny and Santa Claus…a lie people tell kids who want to believe in something they can’t explain.

Yep, I’m here to lay claim to the theory that “influence” as we think of it doesn’t exist.

You see what we all think is “Influence” is nothing more then “Audience”. Let me explain, with a few examples.

Last week I was at Canada’s best Tech conference MESH and sat in on a panel on influence with David Armano. David gave an example of his own influence by sharing a story of how he took a woman and her family into his house during an “at risk” time for them and gave them a hand by providing shelter as well as raising some money for her (over 16k, 3x the hoped for goal).

Before I say anything else it is worth mentioning that his act of generosity and unselfishness is pretty incredible and the world would be a better place if more people did what David here.

So yes this is an amazing thing but is it influence? I say no because it wasn’t the “ask” from David that moved people to donate but rather the cause, so it really wasn’t David changing people’s mind or opinion (my definition of influence) but rather broadcasting the situation and introducing it to people so they could decide on their own if they wanted to help.

Not influence but audience.

Taking the idea further, when Pop Chips or Tasimo Coffee, or whoever sends a case of their product to an “influencer” would they be satisfied if they locked themselves in their basement and binged ate the product and didn’t tell any friends or do they send cases so that the influencer will share within his/her peer group. They probably want them to share.

Again not influence but audience.

So final thought on this (for this post at least) is a little something about Klout Scores. I noticed today that Klout has added context to their scores by saying a person is Influential in certain areas ie: marketing, social media, and in my case “Prince” (not sure if it is the Singer or the Boy who would be King) but the one thing they don’t mention in their rankings is that whatever score I have and whatever verticals I am influential in still is only in the sphere of my social graph.

SO acording to Klout,  I am inflential on the subject of Prince (and for the record I am way more a fan of Morris Day and the Time)  to the people who follow me on Twitter/FaceBook and only those people.

Again not influence but audience.

Real influence is getting people to change their mind or opinion on something…not introducing something to you…and all I see with most “influencers” is a lot of introducing you to things.