Product design is all about knowing when to add a Vagina.

Disclaimer: As always the ideas expressed here are mine alone and do not reflect those of my friends, family or employer. 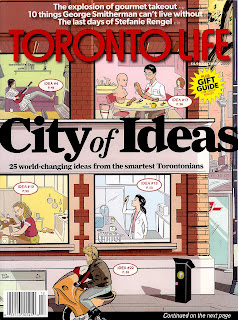 I was very excited to see in the most recent issue of Toronto Life Magazine an article about interesting ideas coming out of local innovators. The reason I was excited was because two people I respect a great deal (Catherine MacIntosh from Zerobaggage.com was idea #19 and Aynsley Deluce from Parkingspots.com was idea #11) were featured in the magazine for their ideas and achievements and while they are both women their inclusion in this post has no relation to the title.
Idea #17 on the other hand is what the title refers to so here goes.
Le Trung, a 34 year old engineer has developed the first robot with feelings and while this achievement is amazing I found his story interesting because of how he made this discovery. Le began building his lady robot in his parents basement with the goal of her to help his parents with basic household chores like make coffee etc. After some time he thought (and I am putting words in his wordballoon here) it would be better to add some lady parts and forget the whole coffee making tasks. 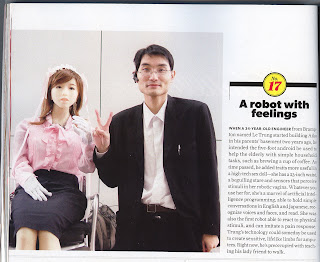 Aiko, the ladybot is the first robot able to react to physical stimuli (yes even in her robotic vagina…ok mostly in her robotic vagina) and can also imitate a pain response. All the jokes aside (and I wrote 54 of them around the fact that his fly is open in the photo to the fact that he keeps his robot lady in his parents basement) I found this interesting because I have always believed that great product design (physical or software) starts with someone filling a need for themselves and over time molding the product or service to the needs of the people using it and/or paying for it.
But in this case Aiko was created initially to fill a need for others and ended up with the sole purpose of being filled with the needs of her inventor. (that is a funny joke no matter what language you speak)
I still firmly believe that putting your customers needs first in product design is the absolute best thing to take in to consideration and to be honest I only wrote this post because I saw an opportunity to make a real business case example with the word vagina in it….because that word makes me giggle.
Takeaway for people who don’t feel like reading the whole post : Don’t screw your products…it will only distract you from your actual goals…and you might just end up in a magazine saying you screw your products.
Response