#WinSaul is over, here is the final update and how to do it yourself.

The idea for #WinSaul came from a place everyone can relate to. I was lying naked in a circular bed staring at myself in the mirrored ceiling running my fingers through my Selleck like chest hair and letting my mind wonder. Everyone has had a moment like that. As my mind and hands drifted I reflected on how I could and should differentiate myself to find a new job opportunity and as silly as it sounds #WinSaul went from “throw away” idea to mapping out a plan in 5 minutes and the rest is, well what it is.

The #WinSaul deadline of October 19th has come and gone and was a huge success. I never imagined that it would have been received as well as it was and I am eternally grateful to everyone who helped share the idea.

At it’s core, #WinSaul was just a blog post, a handful of tweets and a cool piece of art but the idea was much more because it resonated with people. Job searches are awful and while this may not change it I hope people realize there are different ways to approach the task.

Here is my final update with the announcement of the winner coming very soon and after the update I will share the elements that made this successful so you can offer yourself physically to strangers if you wish.

20 were legitimate companies that had a real chance.

7 were very interesting to me.

3 were offers of sexual favors (A hand job is a job, just not the one I was looking for)

1 company will win me soon. (reveal in the next blog post)

Stats aside, here is why I think it worked.

I know everyone shares this pain. Job hunting is strange, the applicant either has no power or is put into a defensive position. That’s not fun for anyone and for the most part the candidate isn’t actually showing their real personality or comfort level. By changing this it becomes a little aspirational. People were rooting for this not because of who I am but rather because they wanted this to work so things might change.

I made it fun and kept it true to my personality. I am not everyone’s cup of tea and that is cool. The real purpose of #WinSaul was to find a job where I fit. Fit to me is more than just the role, it is about the culture, the people and honestly will I want to spend 10 hours a day with the people I will be working with. These things are important to me so with that in mind I made sure everything down to the art used was infused with my personality so people would get a feel of me and like my admitting I have a mirror on my ceiling made them uncomfortable they should not apply.

I added an an emotional pull. By making the deadline my fall on my Birthday it adds a nice emotional feeling to this. Like most people, I like helping people and love birthdays.

I kept it short. The whole thing was only 10 days. Any longer and I believe people would have lost interest.

I didn’t mention it every day. Same idea as keeping it short, I only mentioned it every other day. If my stream was filled with just this for 10 days, I would have looked desperate and that’s the opposite of boldly asking companies to apply with me etc. Living and dying by the idea was key and nothing would be grosser than begging.

I found the balance between over confidence and humility. 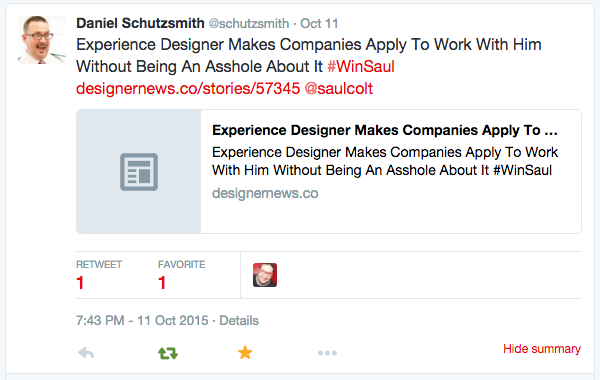 I talked about breasts and posted my usual nonsense. Two people emailed me and said I was stupid to tweet an article about bare breasts. Until I got the emails I hadn’t even realized I had done it because I tweet things I find interesting all day long and plan on still doing that after I find a new job. This is who I am and if that’s a problem I wanted people to make an informed decision before they applied…and I find nudity interesting, just maybe not in the workplace.

I promoted media hits instead of directly to my posts. I was very fortunate to get media coverage from Marketing Magazine and blogTO. Each time I got coverage I promoted these articles through all my social channels and purposely sent people to the articles instead of back to me directly. The articles added another step to get people to apply but that was ok because more importantly it added credibility, a little more excitement and made everything real. Also It was my way of saying thank you. 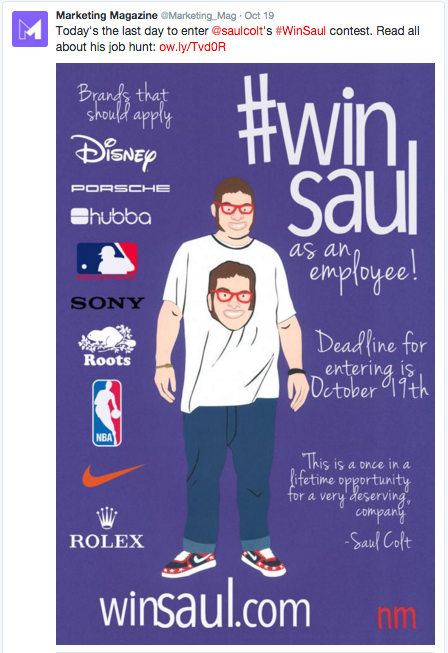 I made shirts. Saul = Che Guevara 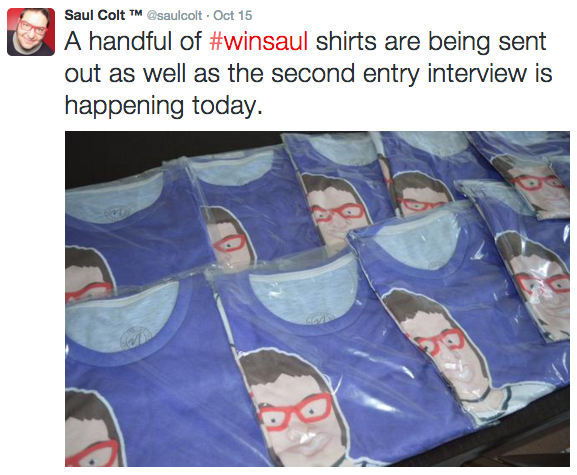 I asked for help.  Easily the best and most important thing I did that ensured this would be successful was that I asked for help. I have amazing friends who I cherish and were instrumental in getting the word out. The same day I posted the original blog post I sent a short email to a list of friends. The key thing in my opinion was that I didn’t ask for intro’s, just a tweet…and only one. There were no follow up asks or expectations. One ask, made it simple and showed absolute and genuine appreciation to any and all who helped. 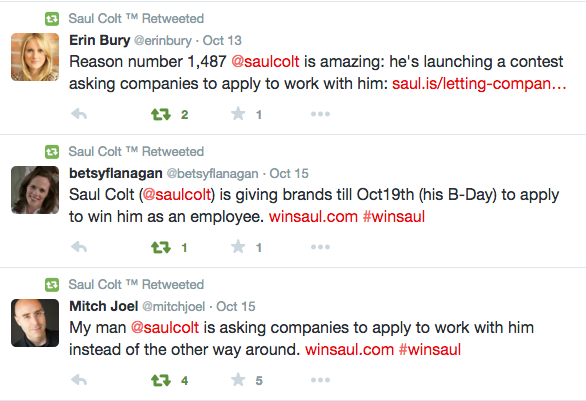 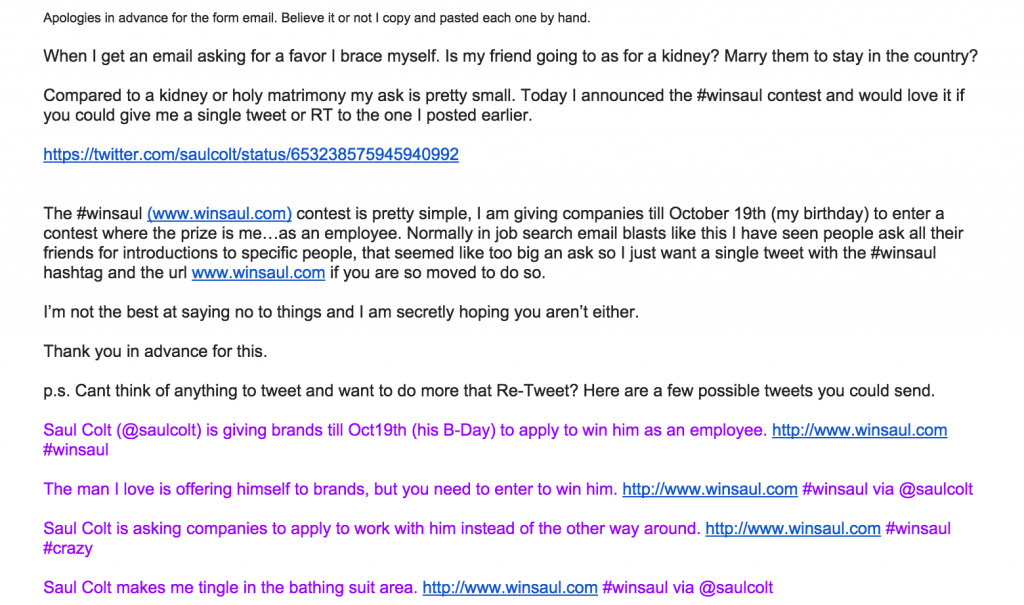 I could not have done this without these people, I am forever grateful and took the time to thank them all.

I showed, didn’t tell. It is easy to tell people you are the greatest at something. I know because I do it all the time, but so do a lot of people. Proving it is very different and I know that if #WinSaul was going to work I needed to prove in a very short time that my declarations of greatness were accurate and earned.

Many people have told me that I have inspired them to try something like this. Honestly I hope a lot of people steal this idea, make it there own and find something that makes them happy…and if you do let me know, I will tweet your campaign our for you.