I am a big fan of Kickstarter Campaigns for a few reasons. 1- I kinda dig being able to help people follow their dreams and passion, and 2-A lot of the stuff I support really speaks to me and doesn’t always translate to a critical mass idea that could/should/would find funding without people like me. So basically, I wouldn’t get to see some really cool stuff that I selfishly want to consume.

Thing is, I had to really think about what I’ve supported recently because in the case of films you usually don’t get to see what you’ve supported for 12 to 18 months after you’ve given your money. That’s completely understandable since they money is going to begin or complete the project in question but what happens is that these projects loose all the good will and excitement around them in the eyes of the people who supported them and in my case I forget all together about my backing and in a strange way loose all interest and anticipation.

To fix this Kickstarters should think more about what can they include in the incentives that happen right away, build community and fans so that there is conversation the whole time or at least some of the time leading up to the finishing of the project because if I keep giving money to back projects and lose the excitement around them or just forget about them I will lose my desire to continue to back projects.

A great example of keeping the excitement going is Flatlight. They had an assortment of incentives that all included their product but also had a few that really stood out. [Flatlight is a credit card sized flastlight that you keep in your wallet]. 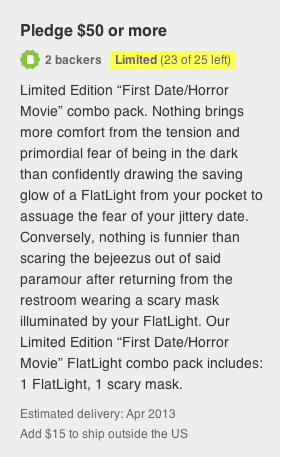 As part of their incentive offering they had a “First Date/Horror Movie” package that included a scary mask with a flatlight. That is the sort of thing that people will talk about it…heck I’m talking about it. I assume that the mask could be sent early to get people excited about the experience and make the wait for the rest of the incentive less of an issue.

If people take more thought in the “immediate gratification” element of their Kickstarter campaigns people this format as a whole will create more excitement and in my opinion people will more likely back more projects and feel as if they are really apart of a revolution instead of being surprised when something actually arrives that they forgot all about.